Misty Morgan, my wife and partner, has a photographic memory for music.
I call it a "phonographic" memory.
She can play any piece she hears once,
even if it's just background Muzak in a store,
but she does not read music.
She has never sung a note off key.

Her first underage jobs were with pickup combos
around Tonawanda, New York.
They played standards, dance music, jazz, and a little country.
As a piano single, she played and sang mostly standards,
Broadway, and popular songs.

When I met her she was playing with her country band
at The Corral Barbecue in West Hollywood, Florida,
under the name "Mary Male".

One night, when we had only been together a short time,
we went to a club to hear an all female jazz quintet.
Somebody asked her to sit in on piano, and she accepted.
I was embarrassed. I said, "Honey, you don't play jazz."
She just said, "I can do it."
As she went on-stage, I went to the rest room.
I didn't want to see it.

Then I heard this great jazz piano,
a mix of Oscar Petersen, Erroll Garner, and Ramsey Lewis.
I went out and looked and it was Misty.
She brought down the house.
I said, "Where did you learn THAT?!"
She calmly said, "I told you I could do it"

She can play all kinds of music,
and never plays anything the same twice.

She is the first female entertainer I know of to play six stacked keyboards onstage.
Sometimes the strings, guitars, fiddles,
and many of the other sounds on our records
are really Misty and her magic keyboards.
She can blend them with Buddy Spicher, Johnny Gimbel,
Vassar Clements, and other musicians,
so that you can't tell unless you were there.

Her ear for sound is a valuable tool I use when mixing sessions.
I can write the songs,
and we work out the arrangements together,
but she has the final word on the mixdowns.
She was the first woman to produce a Number One country record.

When I write a new song I sing it to her first.
She never says it's bad.
If she says, "That's really nice" I know it isn't.
I have go back and work on the song
until she gives the right reaction.
It's sort of an excitement in her eyes... sometimes even tears.
She's always right. My final editor.

Everybody remarks about her unusual harmony on our duets.
I have no idea what she's doing and I don't want to know.
It just works.

On top of all this,
she is the perfect straight man to my funny stuff.
She folds her arms and gives me a look that says this:
"Whenever you're through, dummy.
We're trying to do a serious show here."

The audiences love her,
and so do I.

P.S. Misty and I have been together 24 hours a day for over half century,
I seriously miss her. 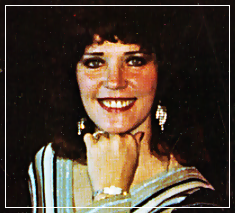