NO LONGER RESISTANCE, IT'S INSURRECTION THAT MUST BE STOPPED COLD

This is probably very close to the make or break moment to prevent what is going to go high order.

It’s not going to matter what we would prefer not to witness. I think we are going to witness it unless DT goes for it now. Full up hard nosed invocation of the Insurrection Act. Clear the streets, clean the streets, arrest the terrorists, thugs & looters (looters should be shot on sight). Cease putting up with the violent
subversive bullshit.

End it now and end it hard. Restore quiet and then slowly allow resumption of the First Amendment right to peaceful protest.

DT has nothing to lose now as the man says. 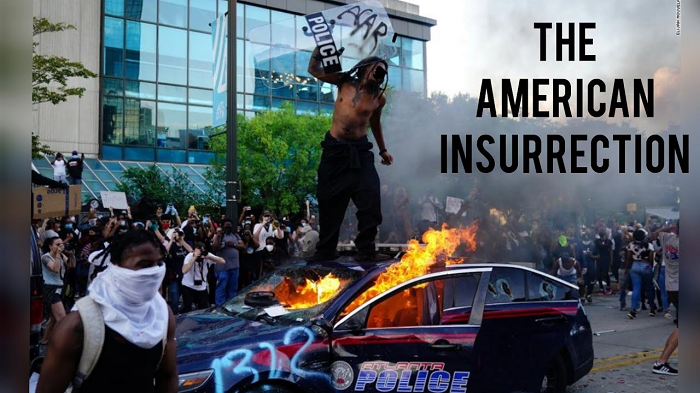 After nearly four years, we’ve arrived at the end
game, the final, violent cry of the “resistance” as it continues to try to overturn the results of the 2016 election and tip the United States of America irreversibly toward anarchy and socialism.

Aided and abetted by the mainstream media and the majority of Democrat politicians, the current unrest sweeping the country is being presented as “dissent” and “protest” but is, in fact, insurrection. It’s time to put it down, hard.

Although the media would have you believe otherwise, we’ve been down this road as a nation before, and dealt with insurrection decisively.

At the very start of the Republic, President George Washington extinguished the “Whiskey Rebellion,” a dispute that began in 1791 over a levy on distilled spirits meant to help retire the Revolutionary War debt, but mushroomed into a tax revolt along the western frontier of Pennsylvania and Kentucky. By 1794, it had become an outright insurrection, and something had to be done.

Supported politically by Alexander Hamilton, Washington himself personally led a militia force against the rebels, and in the teeth of overwhelming force, the rebels—including men who had fought alongside Washington in the Continental Army—surrendered peacefully.

Ironically, the principal military commander of Washington’s troops was Henry “Light Horse Harry” Lee, who had fought gallantly during the Revolution; his son, Robert E. Lee, would later command the Army of Northern Virginia during the Civil War in a rebellion that meant to fracture the country permanently.

The Whiskey Rebellion never threatened the integrity of the Republic (although it did give birth to a century of moonshining in the Appalachian hills). But in 1805, President Jefferson began to fear that his erstwhile vice president, Aaron Burr, whose term had just ended, was up to no good—as indeed he was.

The man who’d shot and killed Hamilton in a duel now wished to collude with territorial governors to foment rebellion and create a new country in the West. But Jefferson’s options involving the use of federal troops were limited. Nonetheless, Burr was finally arrested on Feb. 19, 1807, and charged with treason, but was acquitted.

In response to the Burr affair, and to give future presidents more flexibility in dealing with rebellions, Congress passed the
Insurrection Act of 1807,
which reads:

The Act has been amended several times and been invoked frequently in times of crisis, most recently during Hurricane Katrina; it also overrides the Posse Comitatus Act of 1878, which forbids the use of federal soldiers in domestic policing.

The Act was wielded with gusto by President Ulysses S. Grant during Reconstruction, to put down the southern Democrats’ paramilitary organization known as the Ku Klux Klan.

President Lyndon Johnson used it to justify the deployment of the 82nd and 101st Airborne Divisions to Detroit during the 1967
riots,
and deployed federal troops again the following year during the 1968 riots in Washington, D.C.

National Guard troops also patrolled the streets of Los Angeles in 1992, during the Rodney King riots.

So President Donald Trump’s thinly veiled threat to use the Army shouldn’t be seen as an unconstitutional bluff:
He has both history and the law on his side.
Title 10, Chapter 13, Section 252 of the U.S. Code clearly states:

“Whenever the President considers that unlawful obstructions, combinations, or assemblages, or rebellion against the authority of the United States, make it impracticable to enforce the laws of the United States in any State by the ordinary course of judicial proceedings, he may call into Federal service such of the militia of any State, and use such of the armed forces, as he considers necessary to enforce those laws or to suppress the rebellion.”

That this is an insurrection, there can be no doubt.

The suspiciously well-planned and timed “protests” across the country (which are now starting to spread around the world) have nothing to do with poor George Floyd, the ex-con (assault, armed robbery) from Houston who died at the hands of the Minneapolis police department while being taken into custody.

His death is just a pretext; after all, the nation didn’t explode over the shooting death of Ahmaud Arbery by some white men in Georgia in February; indeed, few even knew about it until The New York Times tried to make it an inflammatory issue in late April.

But Floyd’s unfortunate death—one of the cops has been charged with third-degree murder—created the perfect vortex for the anger of the Black Lives Matter movement (never mind that the statistics don’t bear out the allegations that white cops are waging a war on black people) to combine with the layabout thuggery of the “Antifa” movement.

This is the long-planned transformation of Antifa into the modern incarnation of the Klan (which was itself, recall, a resistance movement against the Republican-led federal government), and their unleashing upon the American public.

This time, however, their animus is motivated not simply by revanchism, but by a burning hatred for the country, and a grim determination to destroy it—and the neo-Marxist concept of “structural racism” has always been their preferred field of fight.

It’s all coming together: the push for socialism, the hollowing out of democratic institutions at the highest levels of state and federal government, and the progressive chic of celebrities and elected politicians who, instead of decrying or even stopping the violence, are actually egging it on.

From the launch of the baseless “Russian collusion” charges, through the sandbagging of Michael Flynn, to the impotent impeachment over—what was it again?—to the unconstitutional lockdowns over the CCP virus, which were designed to destroy Trump’s robust economy, and now to this moment, the goal of the “resistance” is clear: to destroy this presidency once and for all, and usher in a new, green, progressive, egalitarian, totalitarian, socialist United States.

As Barack Obama said in his 2008 speech in Berlin: “This is our moment, this is our time.” He was just a little premature.

Make no mistake: We are at an inflection point in U.S history, one that’s already blown past the political and race riots and Hong Kong flu of 1968 and is barreling toward Fort Sumter, Shiloh, and Antietam.

For decades, a number of blue states have been in open defiance of federal law, especially regarding drugs and immigration. They’ve created “sanctuary” cities, and have refused cooperation with Immigration and Customs Enforcement (ICE), resulting in needless deaths of many Americans. And they don’t care.

Today, from their bastions in New York City, Albany, Los Angeles, Sacramento, Chicago, and Lansing, Michigan, they have openly trashed the First Amendment’s guarantees of the free exercise of religion and peaceable assembly in deliberate overreaction to COVID-19, while simultaneously finding a “right” to violent mass protest and property destruction.

They are no longer demanding a “redress of grievances”—they see the country as the grievance itself.

Designating the masked cowards of Antifa as terrorists is a good first step. It will give the feds valuable new tools to put them away. But neither should the feds shrink from confrontation. This is no time to play patty-cake with the rainbow coalition of terror now being visited upon us.

The only thing violent thugs understand is overwhelming force, brutally applied—a principle that Grant and William T. Sherman came to understand in their conduct of the Civil War. The “resistance” should remember Sherman’s words to his opponents:

“You people … don’t know what you are doing. This country will be drenched in blood, and God only knows how it will end. It is all folly, madness, a crime against civilization! You people speak so lightly of war; you don’t know what you’re talking about. War is a terrible thing! … they wanted war, and I say let us give them all they want.”

No doubt there are advisers in the White House (Jared Kushner?) counseling Trump not to give in to the provocations, that the Left will howl bloody murder the instant their shock troops are bloodied. The media will thunder, Joe Biden will poke his head out from his Delaware basement and bleat on cue, and impeachment will be threatened again.

But the time for Trump to bring the hammer down is now. Follow procedure, invoke the law, send in the troops, get on with it, and get it over.

At this point, he’s got nothing to lose, and a country to save.